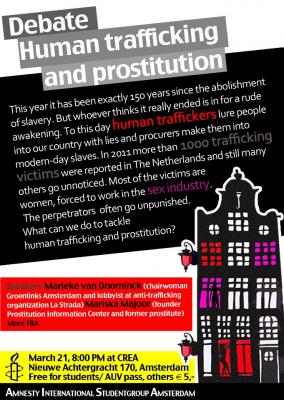 This year it has been exactly 150 years since the abolishment of slavery, but whoever thinks it really ended is in for a rude awakening. To this day human traffickers lure people into our country with lies and procurers make them into modern-day slaves. In 2011 more than 1000 trafficking victims were reported and still many others go unnoticed. Most of the victims are women, forced to work in the sex industry. The perpetrators often go unpunished: cases against suspects get dismissed and only half of the remaining cases will result in a conviction with an average jail time of 2 years.

Last year a law to regulate prostitution was proposed, but it was criticized by several organizations and political parties and got rejected. In February the city of Amsterdam decided to limit the working hours and raise the minimum age for prostitutes, partly to tackle the problem of trafficking and forced prostitution.

During this evening a panel of experts will discuss the current situation in The Netherlands. How do traffickers operate and what makes it difficult to stop them? What are the panelists' opinions on the proposed and existing laws? And what should policy makers do to tackle human trafficking and forced prostitution?