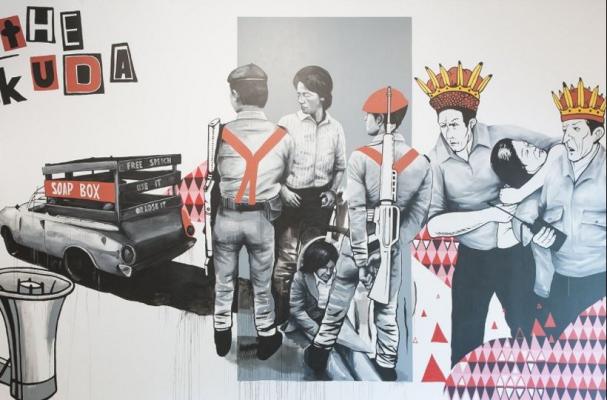 This program will be in English

The 7th Freedom Lecture will be held by Indonesian artist and director of the ruangrupa artists’ initiative: Ade Darmawan. The work of Ade and Ruangrupa is closely interlinked with the socio-political conditions and human right issues present in contemporary Indonesia. By using street art, pop art and involving young people with their projects, ruangrupa is very popular with the younger generation. Creating and reconstructing urban space and virtual space is a central theme in the work and projects by Darmawan.

Ruangrupa emerged in Jakarta shortly after the downfall of the Suharto authoritarian regime that prevailed for 32 years in Indonesia. In this environment, space for the artist freedom of expression emerged alongsideradical changes in terms of how cultural and artistic practice are produced, distributed, and consumed. With the newly elected president Joko Widodo it will be interesting to see in what way Indonesia will develop itself.

Besides the lecture of Darmawan on his work, ideals and outtake on freedom, Jacqueline Hicks will present us with a short presentation on the dominant political, economic and religious powers that are key in shaping the dynamics of contemporary Indonesia. In a panel discussion with Hicks and Darmawan we will elaborate further on the strategies by artists and local communities to claim their space within the arena of large political, corporate and religious powers who all battle over space in the 3rd biggest democracy of the world. Gertrude Flentge will provide us with a general introduction into the work of Darmawan and the role ruangrupa fulfils within society.

Ade Darmawan is a graduate of the Indonesian Institute of the Arts Yogyakarta, Darmawan spent two years at the Rijksakademie in Amsterdam in 1998, before returning to Jakarta to establish the ruangrupa artists’ initiative. Darmawan’s work has been exhibited in Indonesia and International. Darmawan is the director of the Jakarta Biennale and festival director as well as artistic director of OK Video Jakarta, International Video Festival from 2003 to 2009. With ruangrupa, he participated in the Gwangju, Istanbul, and Singapore Biennales. Darmawan was also co-curator of Fixer, an exhibition of alternative spaces and artists’ collectives in Indonesia, in 2010, and a member of the Jakarta Arts Council from 2006 to 2009.

Jacqueline Hicks is a researcher at KITLVHer research interests revolve around state-civil society relations, particularly in Indonesia. She graduated with a PhD thesis on the changing relationship between the Indonesian state and the business community over the transition from authoritarian rule in 1998. Since then, she has written on Islamic politics and religious violence. Gertrude Flentge is program manager culture and media at DOEN Foundation. On the Freedom Lecture Political and Cultural Center De Balie (Amsterdam) together with Amnesty International organize for the second year: The Freedom Lecture. For each lecture a critical thinker gives a speech on the cause he or she is committed to. The line-up of speakers include human rights activists, defenders, writers, philosophers and artists. This year we had the pleasure to welcome opposition leader Andrei Sannikov from Bellarus en internet activist Esra’a al Shafei from Bahrein.