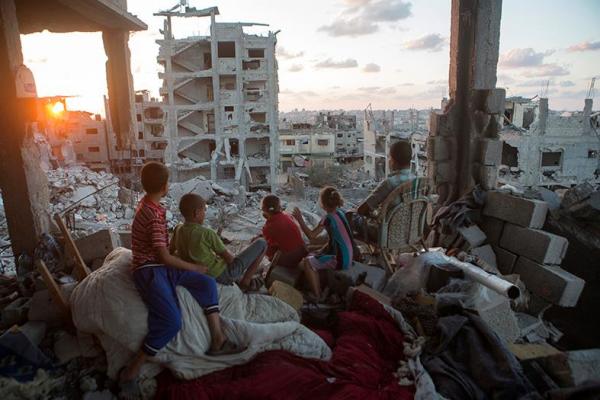 The photo exhibition with photos made by Anne Paq (ActiveStills) will be shown untill 30 September at:

"One year after the Israeli military offensive on the Gaza Strip, not one home has been rebuilt. Tens of thousands of Palestinians are still displaced. 2,200 Palestinians, the vast majority of them civilians, including more than 500 children were killed.

I have known Gaza since 2010. As I was the only one from my photo collective, Activestills, to be able to enter, I felt a special responsibility to document life in the Gaza Strip. In 2012, I was there when the Israeli offensive “Pillar of defence” started, and I stayed to document it. I was there again in In 2014, when the new large-scale Israeli assault started, I knew what it meant for the population, which has nowhere to escape, and no shelter to take refuge in when the terrifying bombings began.

Last summer I went for three weeks, to document what can only be described as a series of atrocities. In September I decided to go back, and was shocked to find the extent of the devastation. I started a photo series which became 'This used to be my bedroom', featuring children standing in their destroyed bedrooms, raising questions about the psychological trauma and what kind of future these generations growing up with the fear of further bombings will have. Children aged 6 years old have already experienced three military offensives. With my photos I hope to raise awareness about the people in the Gaza Strip, who are still under the Israeli occupation and subjected to a very long siege, and to regular large-scale military attacks by the Israeli occupation forces. The images of destruction, which are heart-breaking and important, must not make us consider the Gaza Strip as a humanitarian case, as it is often depicted in the mainstream media. This is a man-made disaster that can be reversed, and we must act, on every level, for a radical change. This cannot happen again."

Anne Paq, born 1976, is an award-winning French freelance photographer and videographer. She is a member of the Activestills photo collective, and has been based in Israel/Palestine since 2006. . Her work has been exhibited worldwide and published in various media outlets such as the NY Times Lens, Paris Match, le Nouvel Observateur, Al Jazeera, Haaretz newspaper, The National, The Huffington Post, +972 Magazine, Stern and CNN.

The exhibition is organized by gate48 and Palestine Link in cooperation with Galit Eilat.