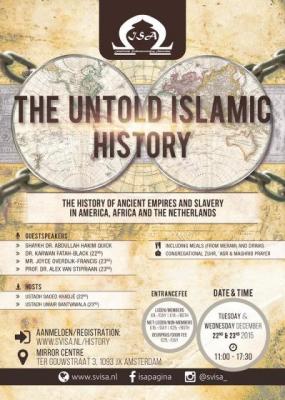 ‘Black pete’, ‘slavery’, ‘colonialism’, ‘racism’, terms we encounter frequently these days. The public debate on these subjects contains many different perspectives and arguments. Everybody seems (obligated) to have an opinion. We, the Islamic Student Association Amsterdam (ISA), find it important to go back to the core of the arguments in its historical background to enhance comprehension of, what seems to be, a complex debate. In doing so we would like to include another ‘’trending topic’’: Islam and its perspective. During the event we will cover two main subjects. Firstly, our ‘’untold history’’. What contribution has Islam had in science and our current modern world? The middle ages are often described as ”dark ages”, but is this term also relevant for the middle ages of Islamic societies? The second and biggest part of our event will be about slavery. A term that recalls a dark and horrific past known for its humiliation of a specific group of people. Slavery in Islam and the history of it in The Americas and Africa will be covered to create awareness. We would like for students to familiarize themselves with the different perspectives to broaden their scope and engage in the public debate, hence we have invited a great speaker: •Shaykh dr. Abdullah Hakim Quick pursued his study of Islam at the Islamic University of Madinah where he graduated and received an Ijaza from the College of Da’wah and Islamic Sciences. He later completed a Masters Degree and a Doctorate in African History at the University of Toronto in Canada. Presently he is a Senior Lecturer with the Islamic Institute of Toronto.

Our hosts for the evening will be Saoed Khadjé, founder and manager at Dar-al-‘Ilm, and Umair Bantvawala, teacher at Dar al-Fahm and speaker at Moslimjongeren Almere.

Note: This event is open to all, please keep in mind our main objective is to create an opportunity of save environment for students to engage in an academic conversation. Therefore members of press are requested to announce their attendance at bestuur@svisa.nl and introduce themselves during the event. Many thanks in advance for your cooperation.